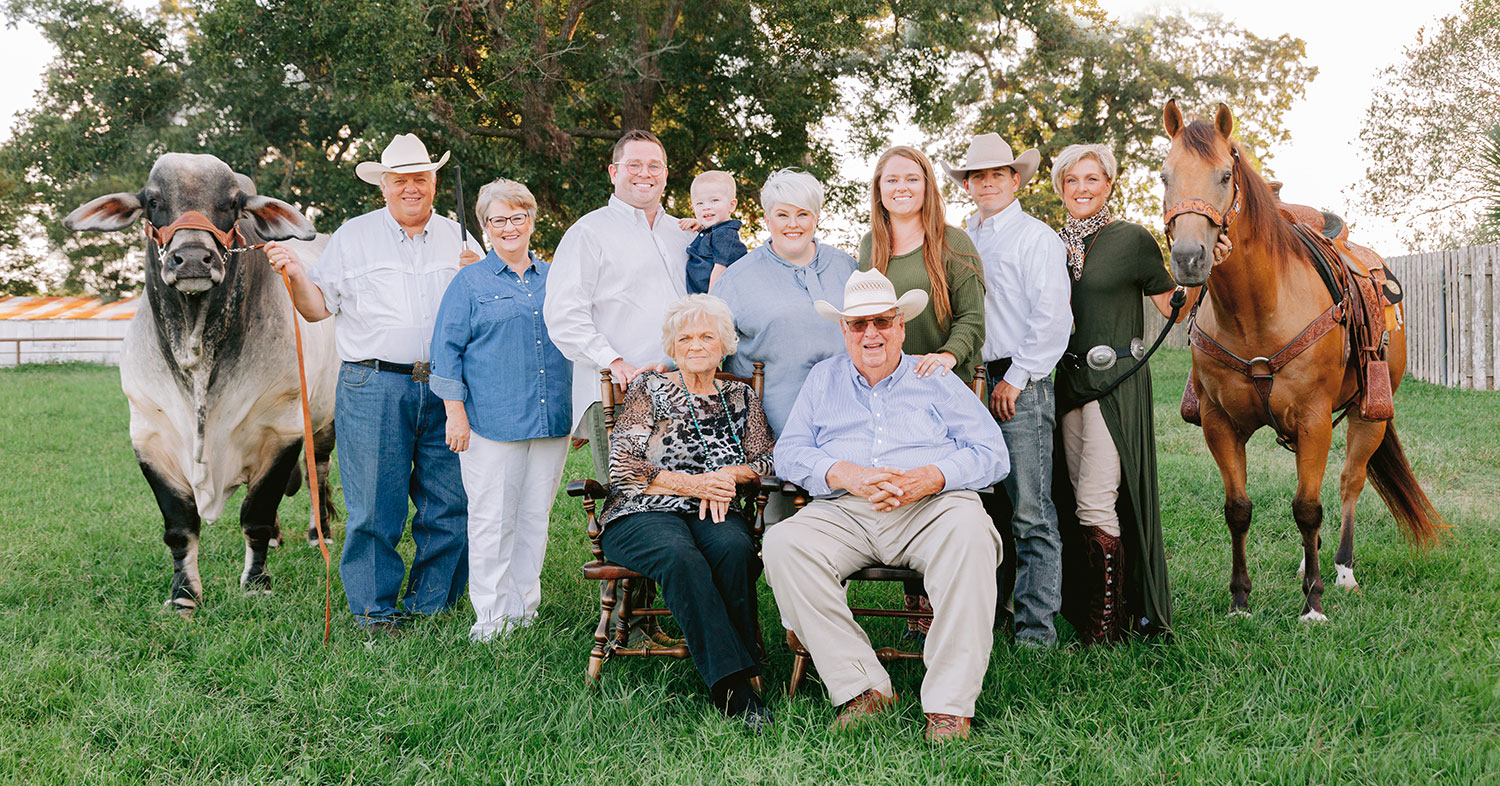 For four generations, V8 Ranch has remained steadfastly independent and family-owned. That gives us the flexibility to maintain an old-school commitment to our skills, training and history. We only employ skilled tradespeople who are as passionate about Brahman cattle ranching as we are. Our staff has become a part of our extended family, and they deserve accolades for making the V8 brand a highly revered name in the Brahman cattle industry.

But, only V8 Ranch family members are authorized to brand a cow or bull with the V8 stamp of excellence. Why? Because the meaning behind the process is so very important.

Both Sloan and Mollie Williams come from Texas families with a passion for ranching. In 1971, the Williams continued that tradition with the purchase of V8 Ranch. For more than forty years, the V8 team has kept true to our family values and our deep ranching roots. Those in the business know why we do it: the love of our cattle. We take great pride in our heritage, our Christian values, our work ethic, and above all our hands-on family atmosphere. Here at V8, we wake up each day excited to reach new heights with our herd while honoring and preserving V8’s time-honored traditions of excellence. 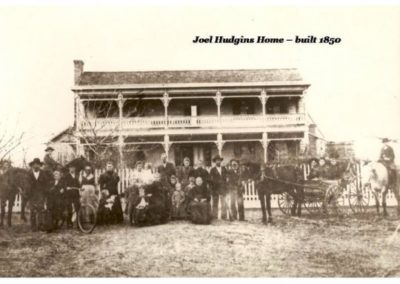 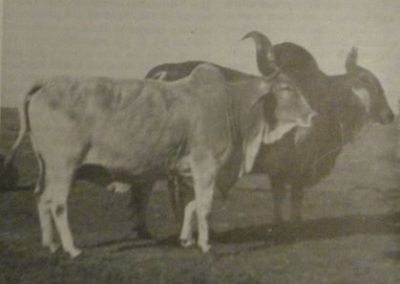 Hattie Cleo “Ol’ Bob” (ABBA C1409) born in Brazil, and imported to the United States in 1925. This female would go on to become the most significant imported female in the history of the breed. She was owned by W.S. Jacobs, a breeder who maintained a herd of cattle with pure Indian descent branded “AA” cattle. From Hattie Cleo, the Tippu the Great and Optimus lines developed, which can be found in bloodlines of the original V8 herd. 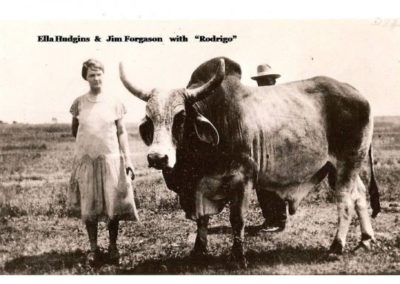 Mollie’s family at J.D. Hudgins imported cattle from Brazil that would be the base for the American Brahman in the United States. Jim Forgason is the man pictured behind the imported bull, “Rodrigo.” 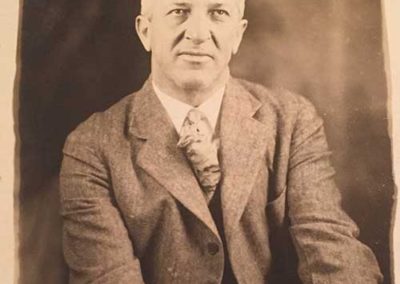 Knox T. Williams “KT”, Sloan’s grandfather, settled in Millican, Texas where he ran a large scale commercial cattle operation. His original homestead ran from Millican to the Navasota River. Williams maintained a herd of Indian cattle as well. From these ranching roots, Sloan developed his innate cow sense and hustle. 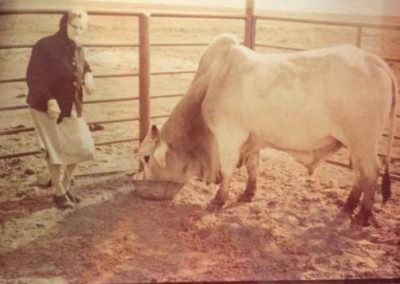 Ethel Hudgins Forgason (1884 – 1972) a matriarch of our family. Ethel was a daughter of J.D. Hudgins and she and her husband James Boone Forgason set the foundation for our family’s love of the cattle business, and strong women. Ethel often took her granddaughter, Mollie Forgason, with her on her daily chores of feeding herd bulls. 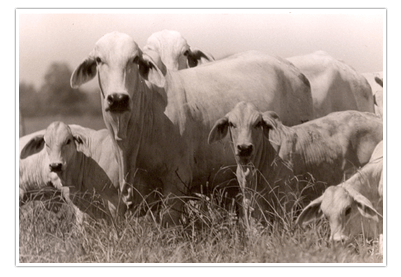 V8 Ranch established by Howard Parker of Center, Texas. Parker was a Ford automobile dealer and thus named his cattle ranch “V8 Ranch.” Parker, who didn’t know much about cattle at the time, bought 40 females from Marshall Johnson. Parker asked for Johnson to have the cows separated from the calves. He would then select the 40 fattest calves as the ones he wanted and would then have them matched to their mothers. A unique selection process but is seemed to work, as cow power has been the basis for our herd ever since. The original V8 herd was based from Jacobs bloodlines and later introduced some Manso and Imperator breeding. 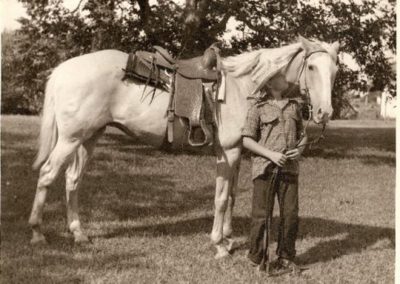 Mollie Williams spends her childhood growing up on the J.D. Hudgins Ranch as the daughter of Lanier and Ann Forgason of Forgason Division of J.D. Hudgins. Our close family tie remains, and we hold this ranch at the highest level of respect and admiration. 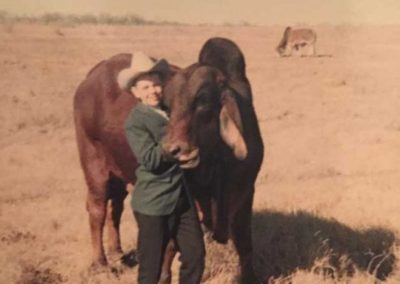 Sloan and Jim start “Sloan Williams & Son,” a business for raising red Brahman cattle. Their herd would be built on a lot of Kubela breeding. Jim and Sloan raised many notable red cattle, including SW Saddle Fancy Lady, Saddle, and more. The herd ultimately sold to Hudson Cattle Corporation. 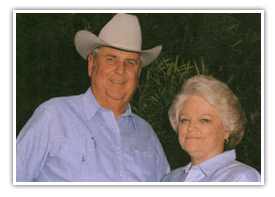 Sloan Williams Purchases V8 herd, negotiating the million-dollar-deal via a pay phone in Red River, New Mexico during the family’s first and only ski trip. 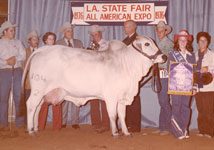 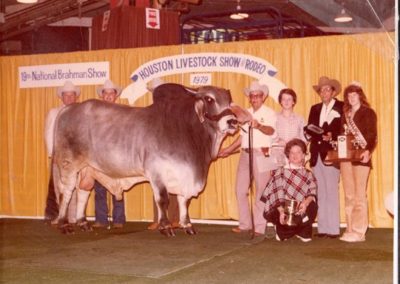 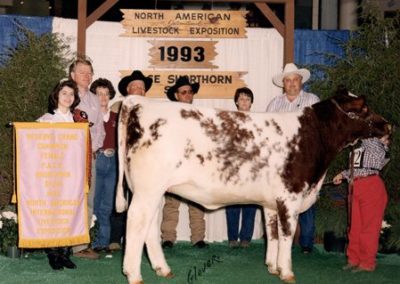 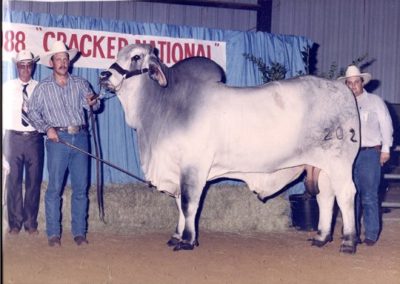 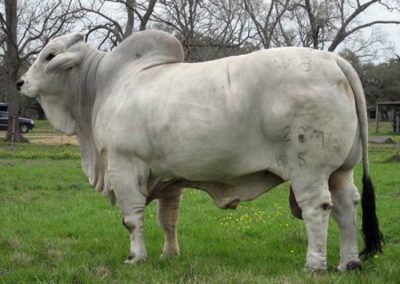 Superstroke – Mr. V8 287/5 Born. He won an unprecedented six back to back International Champion Get-Of-Sire championships from 2001 to 2006. 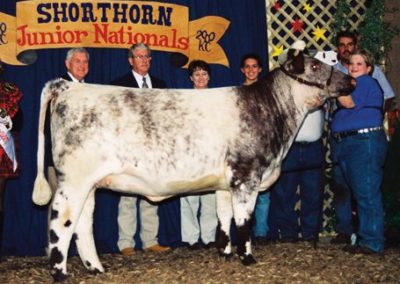 Catherine makes Shorthorn history by exhibiting three back-to-back Junior National Champion Females (1999, 2000, and 2001). Catherine is a past national vice president and Rachel served as national junior board president. Both girls were named national champion showman of the Shorthorn breed. 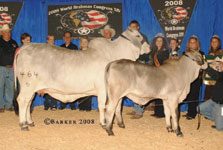 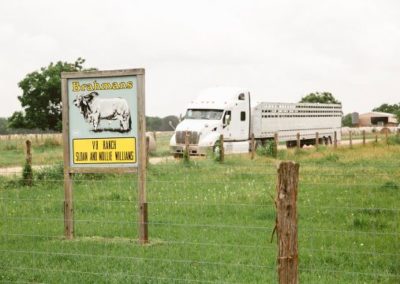 V8 Ranch completes historic shipment to Ecuador of the first live cattle to be exported from the United States to South America since borders closed in 2003. 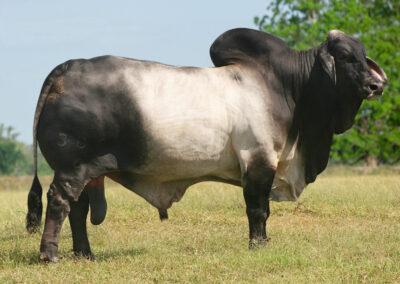 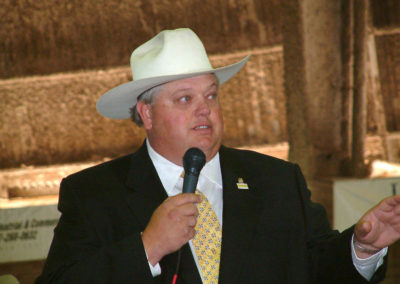 Jim Williams judges the World Brahman Congress for the third time, this time in Columbia. 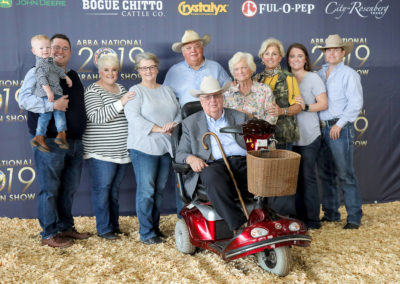 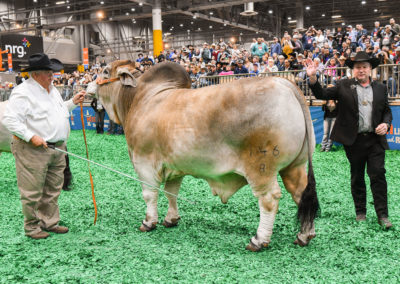 Mr. V8 146/8 sets the record as being the first to win Grand Champion Bull at Houston three times in a row. 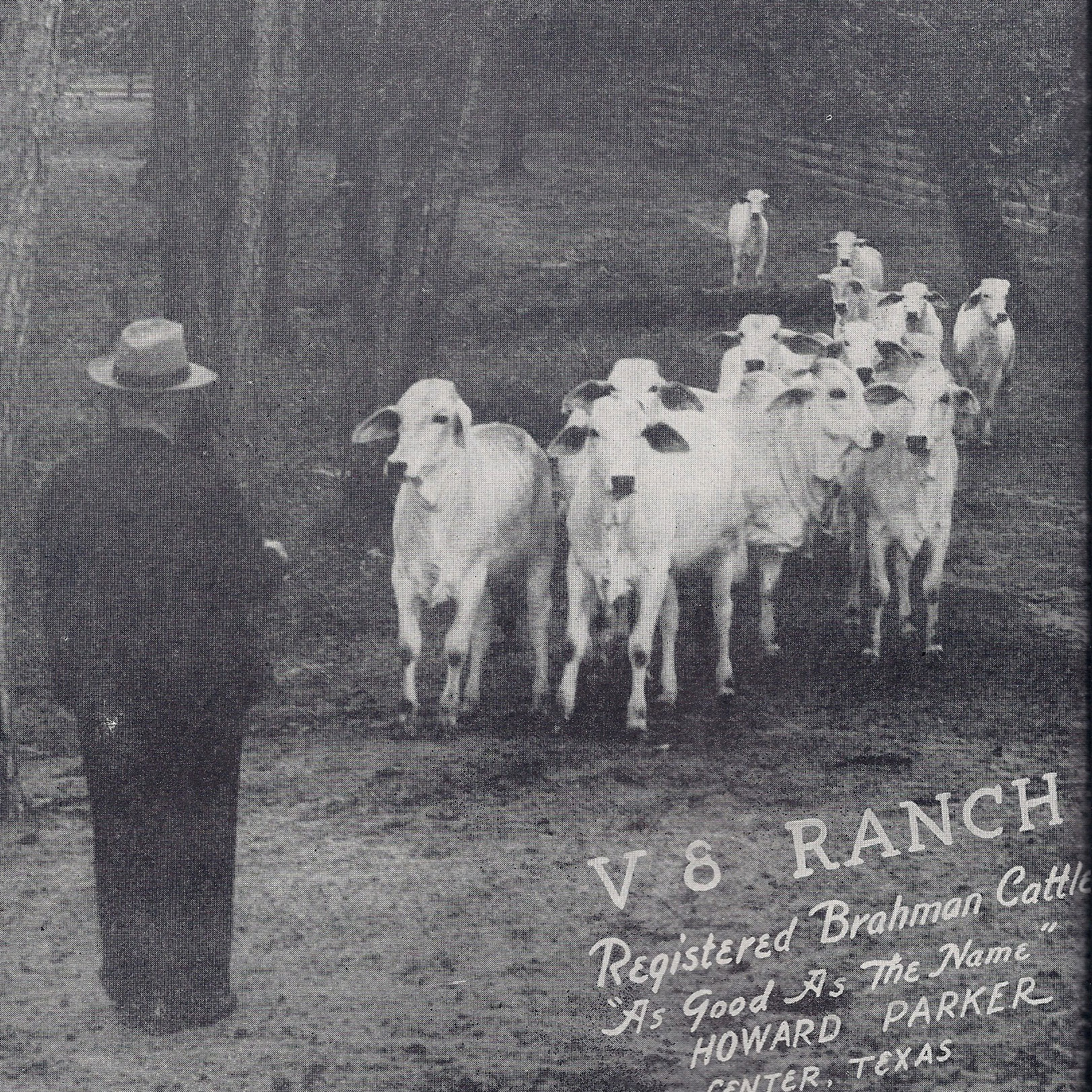 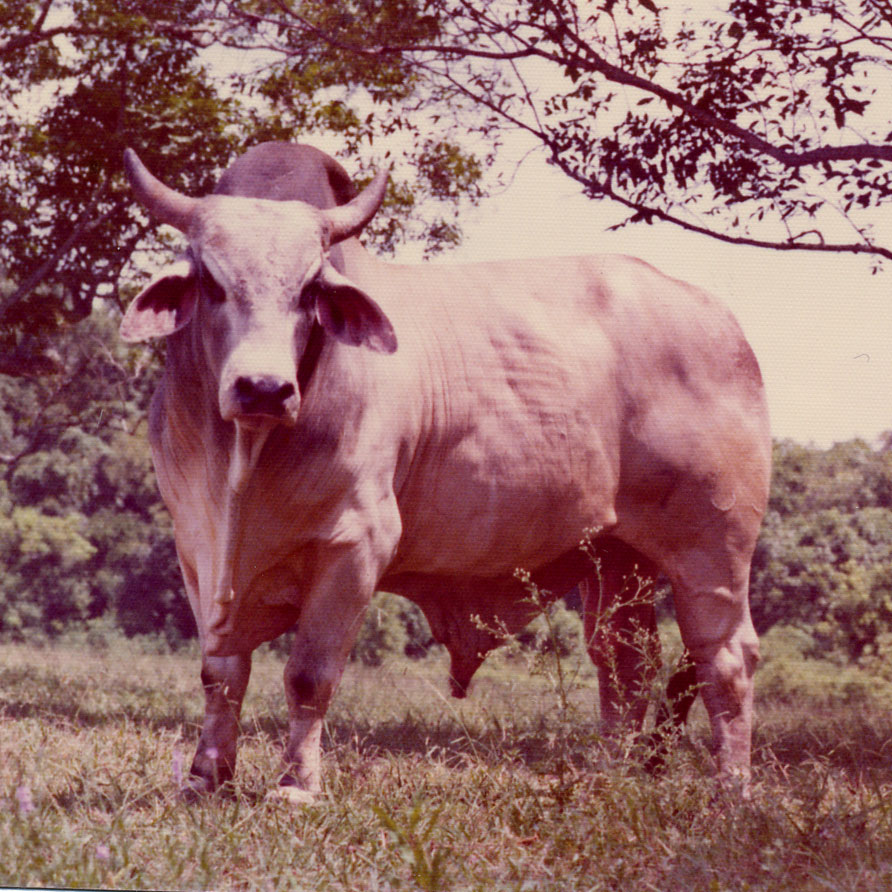 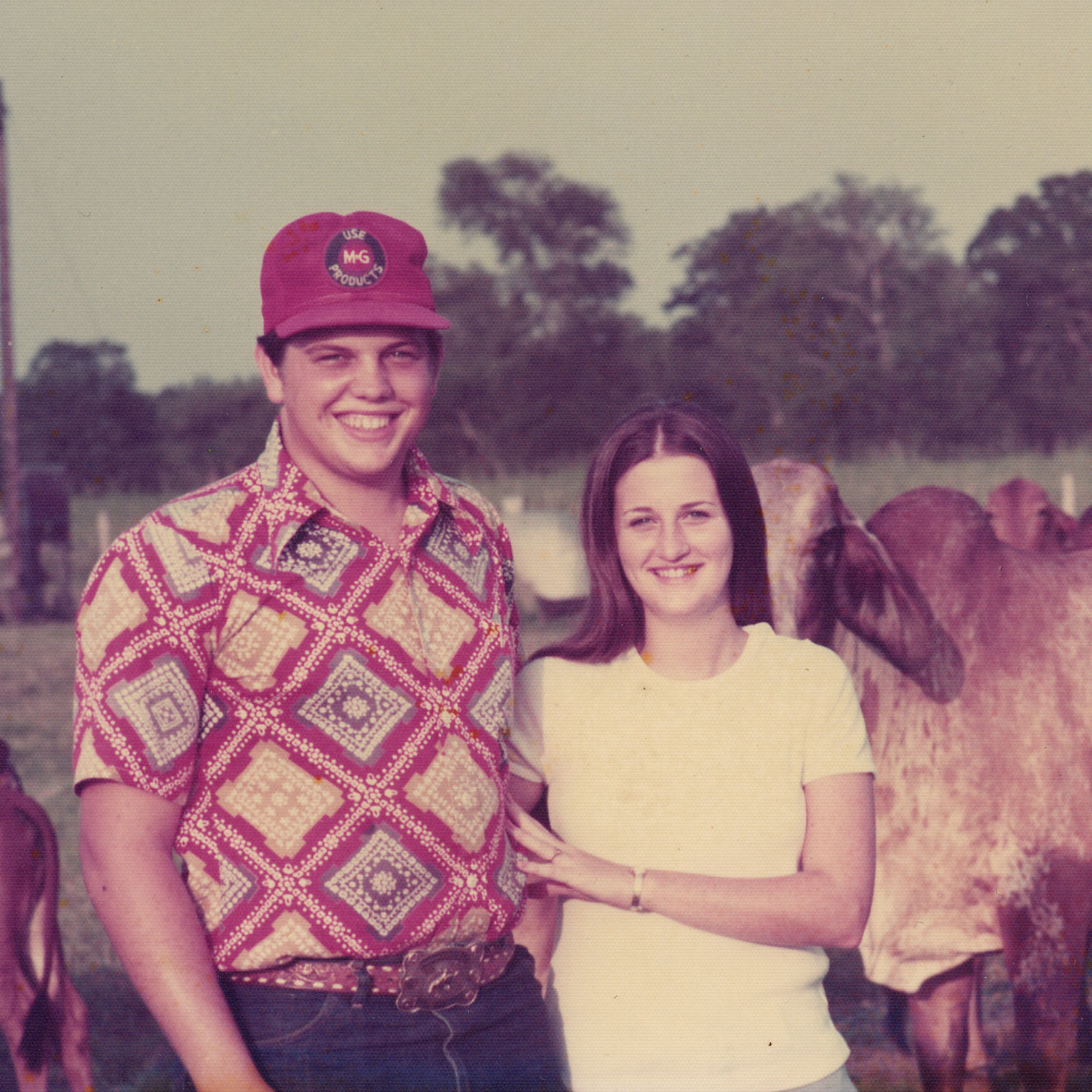 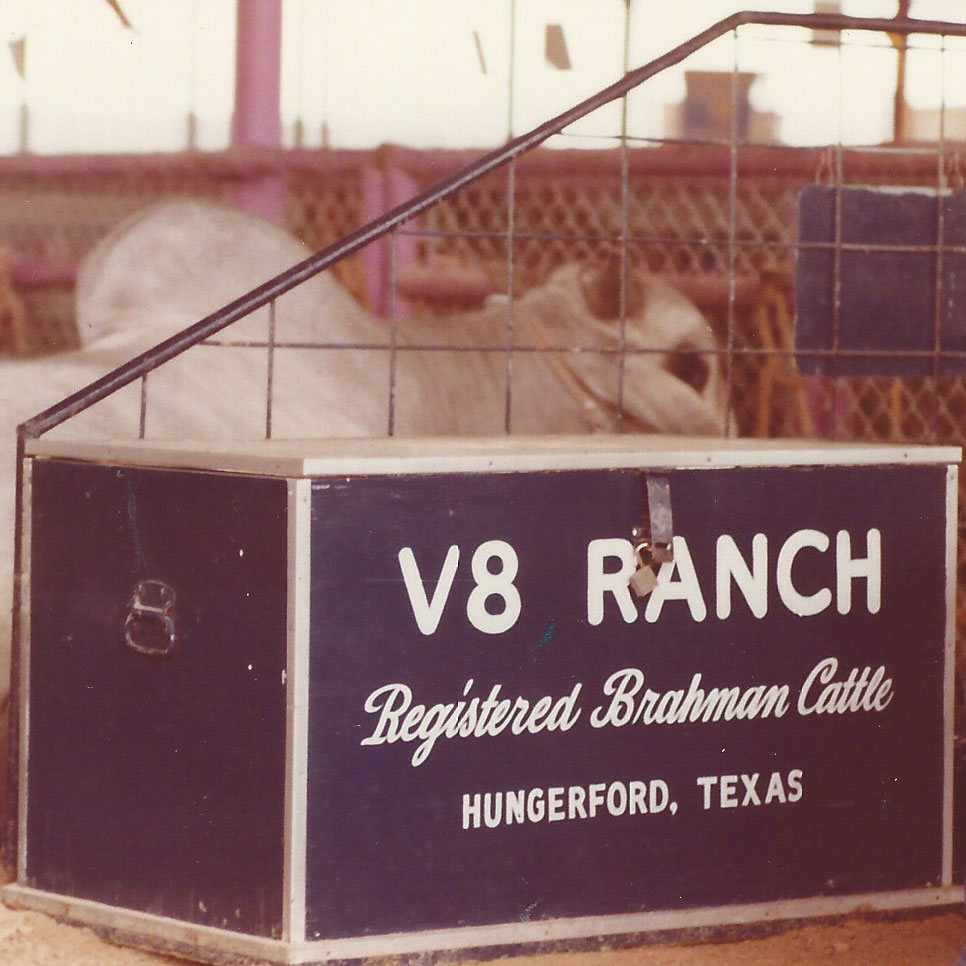 We stake our reputation on each animal we deem worthy of the v8 brand, a symbol of our guarantee, our commitment, and our promise of integrity.