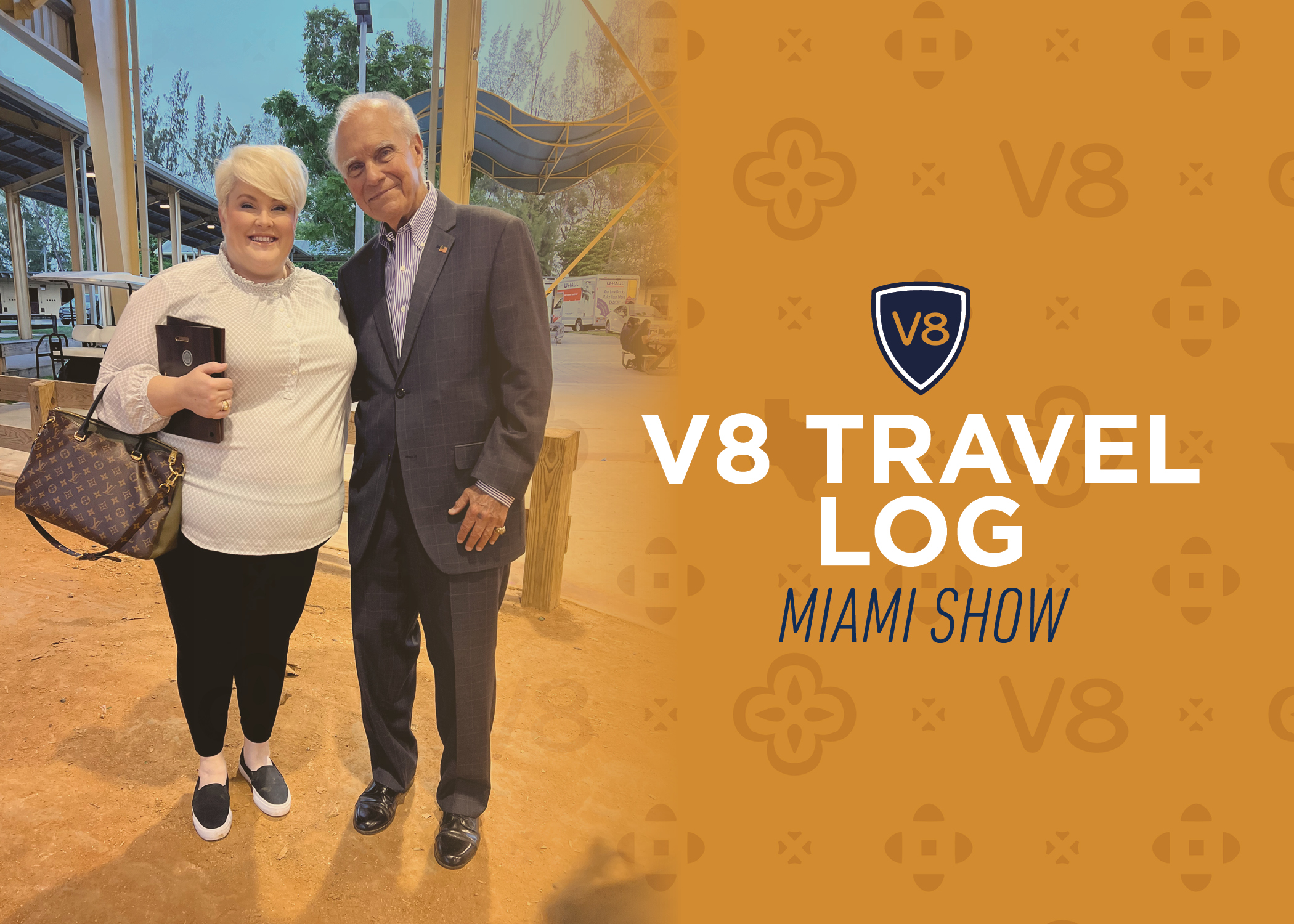 Adventures at the Miami International Agriculture, Horse, and Cattle Show

Catherine Williams Neumayr and her husband, Luke, traveled from Boling, TX to Miami, FL to attend the 2022 Miami International Agriculture, Horse, and Cattle Show. Held April 8-10, 2022, this was the 15th anniversary of the event, but the first time V8 Ranch took a string of cattle to the show.  How did it go? Cat shares her travel log from the weekend:

It’s about a 19-hour drive from Southeast Texas to South Florida. We wanted to be able to turn the cattle loose in the trailer so they would have a better trip from Boling-Iago to Miami, so only took four head – three heifers and one bull – from the V8 showstring. Jeff and Shari Richard drove the truck and trailer straight through, all the way to Miami, leaving V8 Ranch early Wednesday morning and arriving in Miami very early Thursday morning. That is one long drive!

Luke and I boarded an early-morning flight to Miami. We had flown through Miami once before, many years ago, on our way to photograph a wedding in the Dominican Republic. But this would be our first time getting to visit and explore the city, and our first time attending the Miami International Agriculture, Horse, and Cattle Show.  We traveled with Mikey Curry, our V8 showman. A college student, Mikey had classes and exams that prohibited him from joining the Richards on the 19-hour truck and trailer ride.  This one time I think he was truly grateful to have exams!

That night, we attended the reception and the 2022 Magic City Brahman Sale at the fairgrounds. At the reception, I was honored to receive plaques for both myself (Special Friend Recognition) and my dad Jim Williams (Legends Recognition, for a lifetime of dedication to the cattle industry). Former Senator Javier Souto is the County Commissioner for Miami-Dade County, the Chairman of the Show, and a dear friend of my father. He presented the awards at the reception, and I enjoyed getting to visit with him about our shared appreciation of the older William States Jacobs’ breeding cattle that are the foundation of both of our herds.

There were many international Brahman breeders at the reception, and at the show, in general. I was glad to see many Brahman friends that I often only see once a year in Houston, like Fabio Jaramillo and Jose Albertazzi. I also was happy to get to visit with Dr. Isidro Matamoros and Ms. Dinie Espinal of Zamarano University in Honduras. V8 Ranch will host two interns from their program this fall. Barry and Charlotte Smith told me Friday night that this show in Miami is very similar to the shows that they travel to in other countries. I haven’t had the pleasure of attending Brahman shows in other countries yet, but I’ll be adding that to my bucket list! 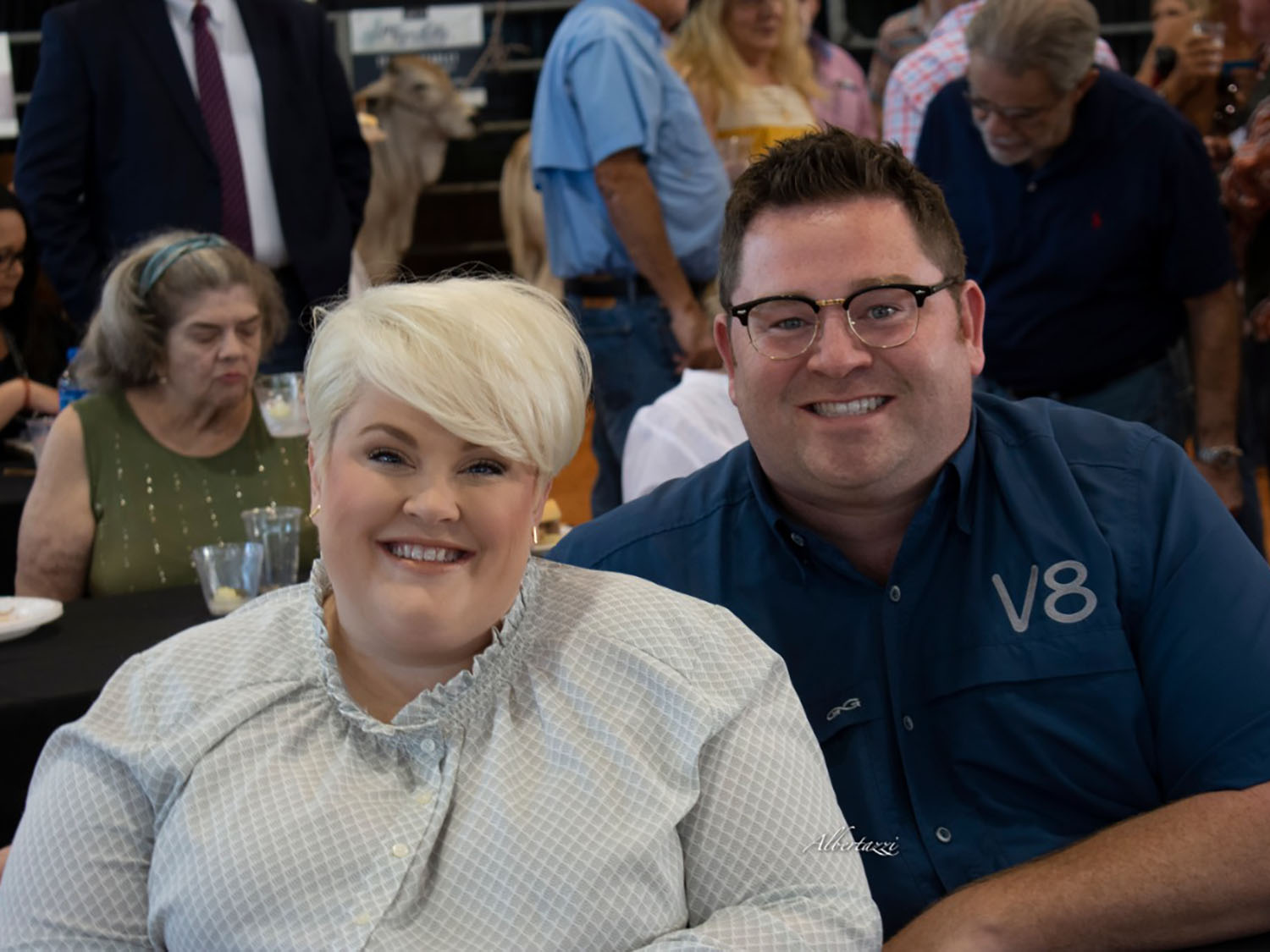 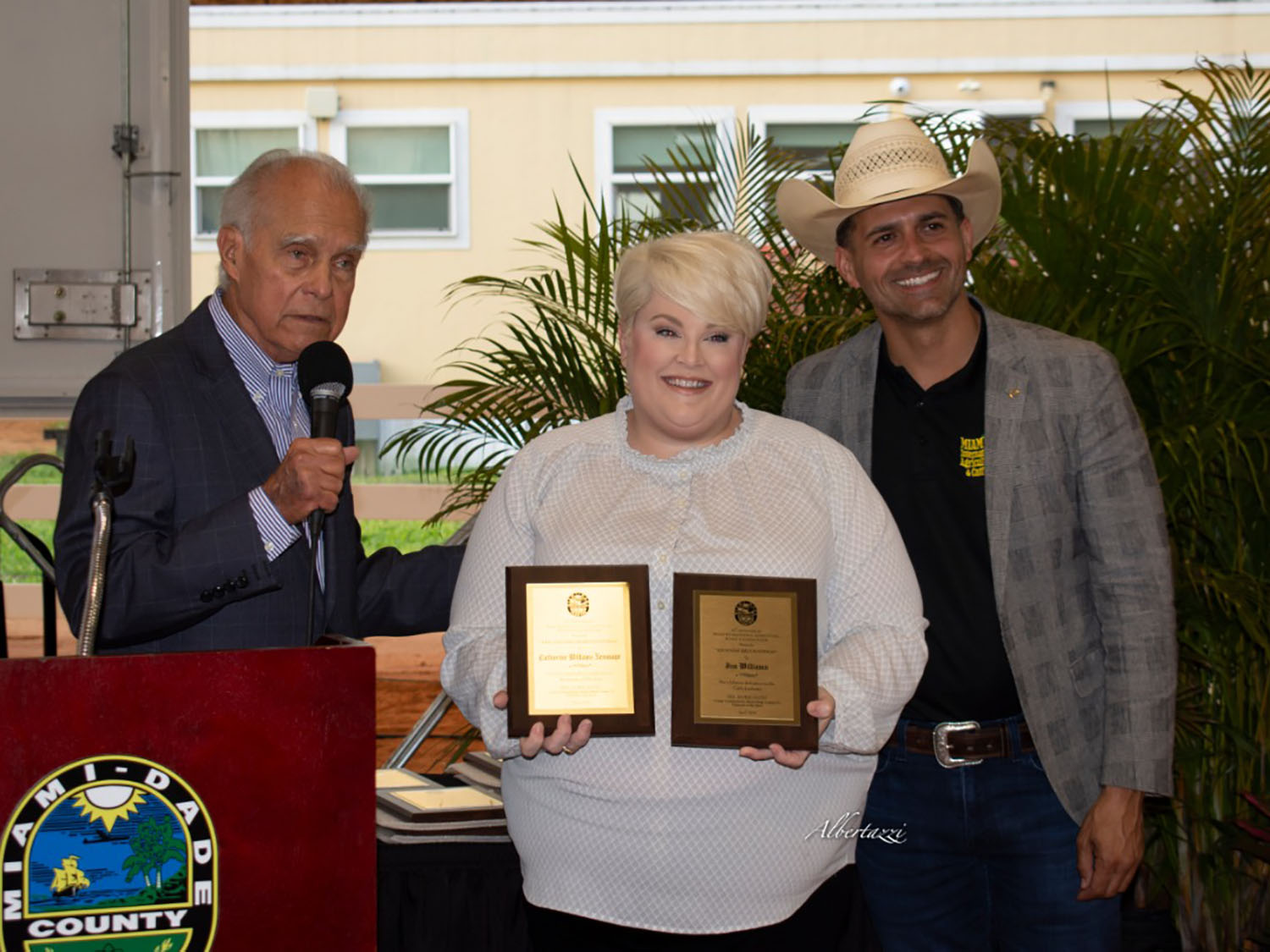 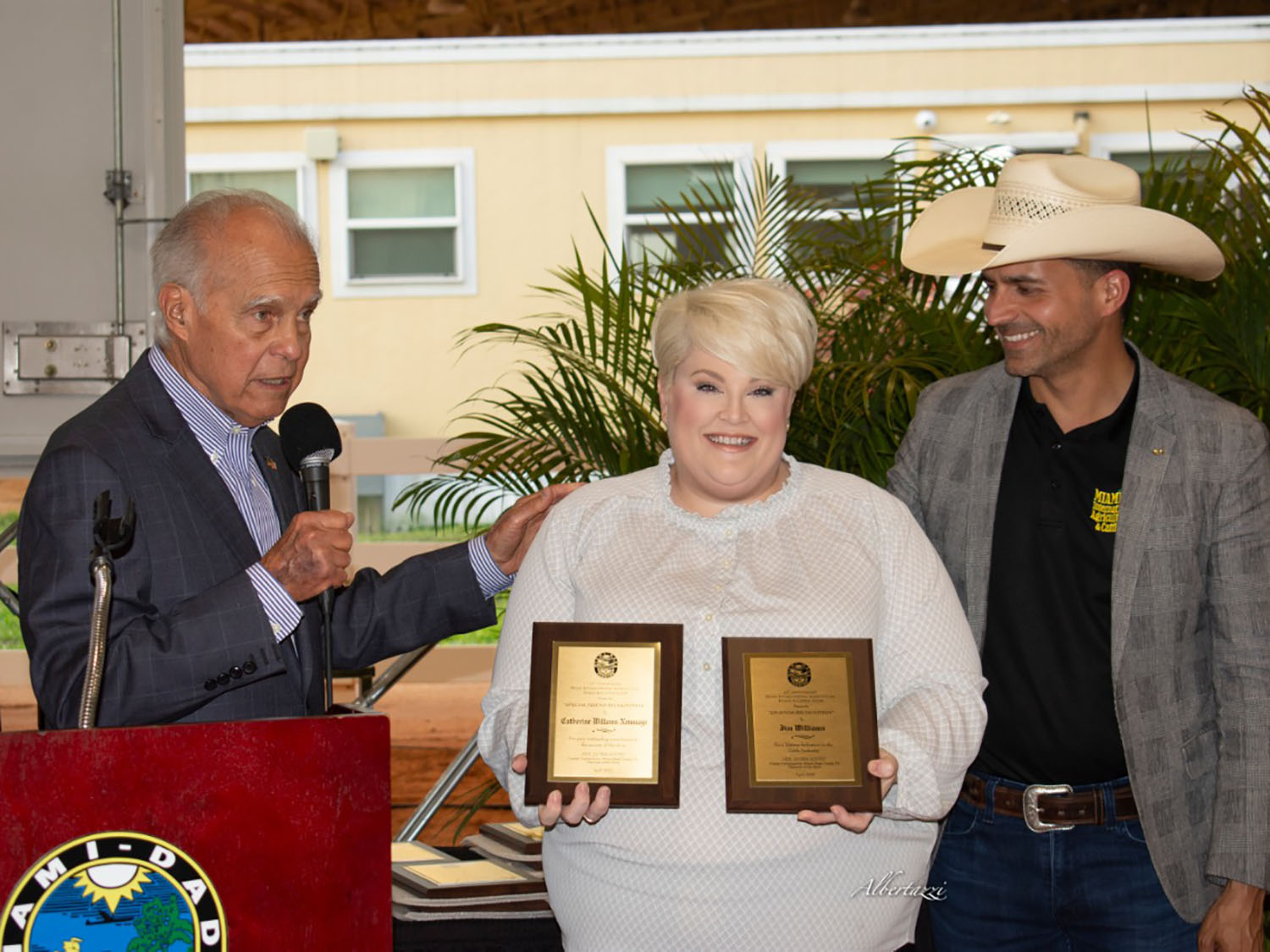 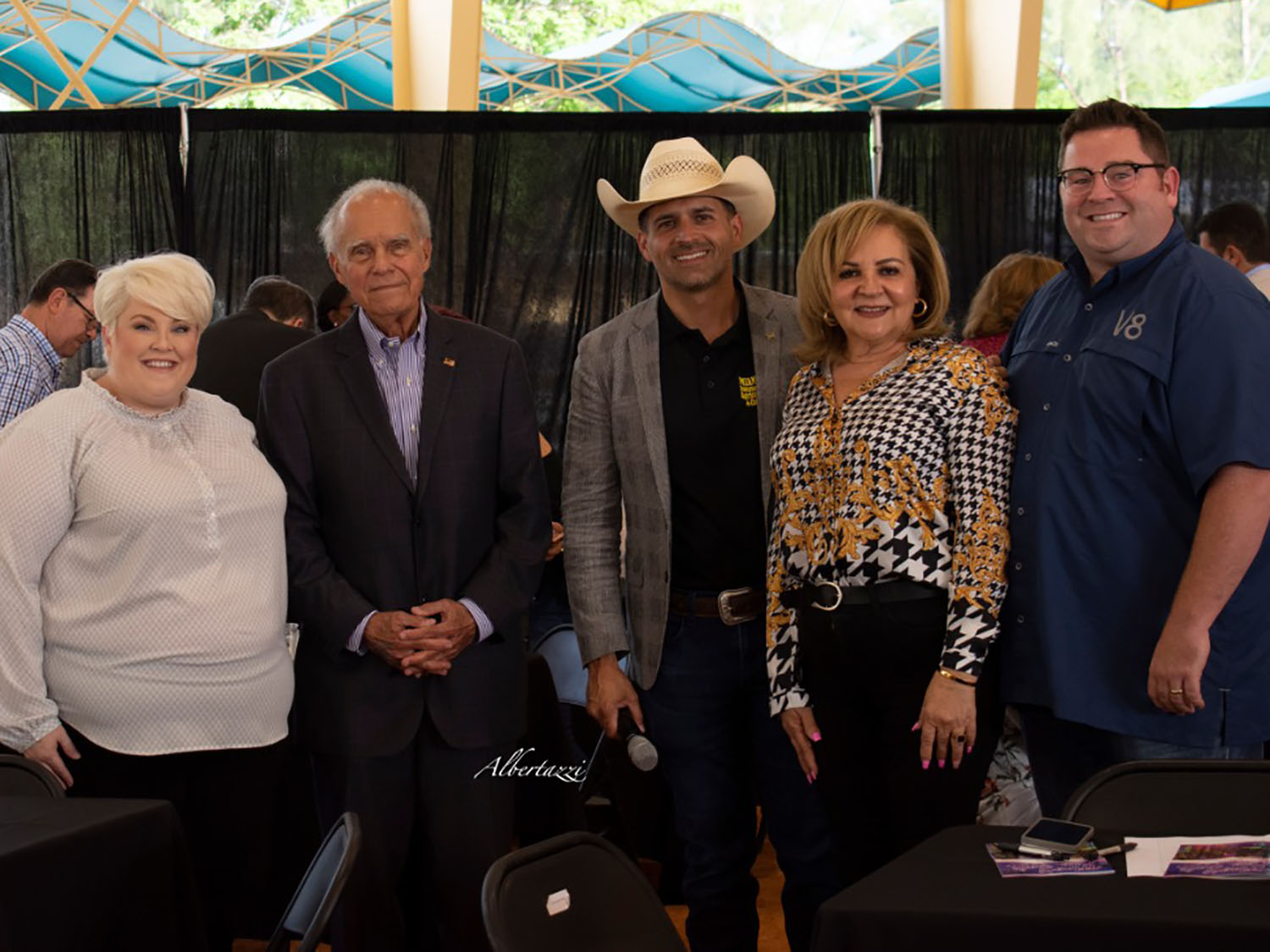 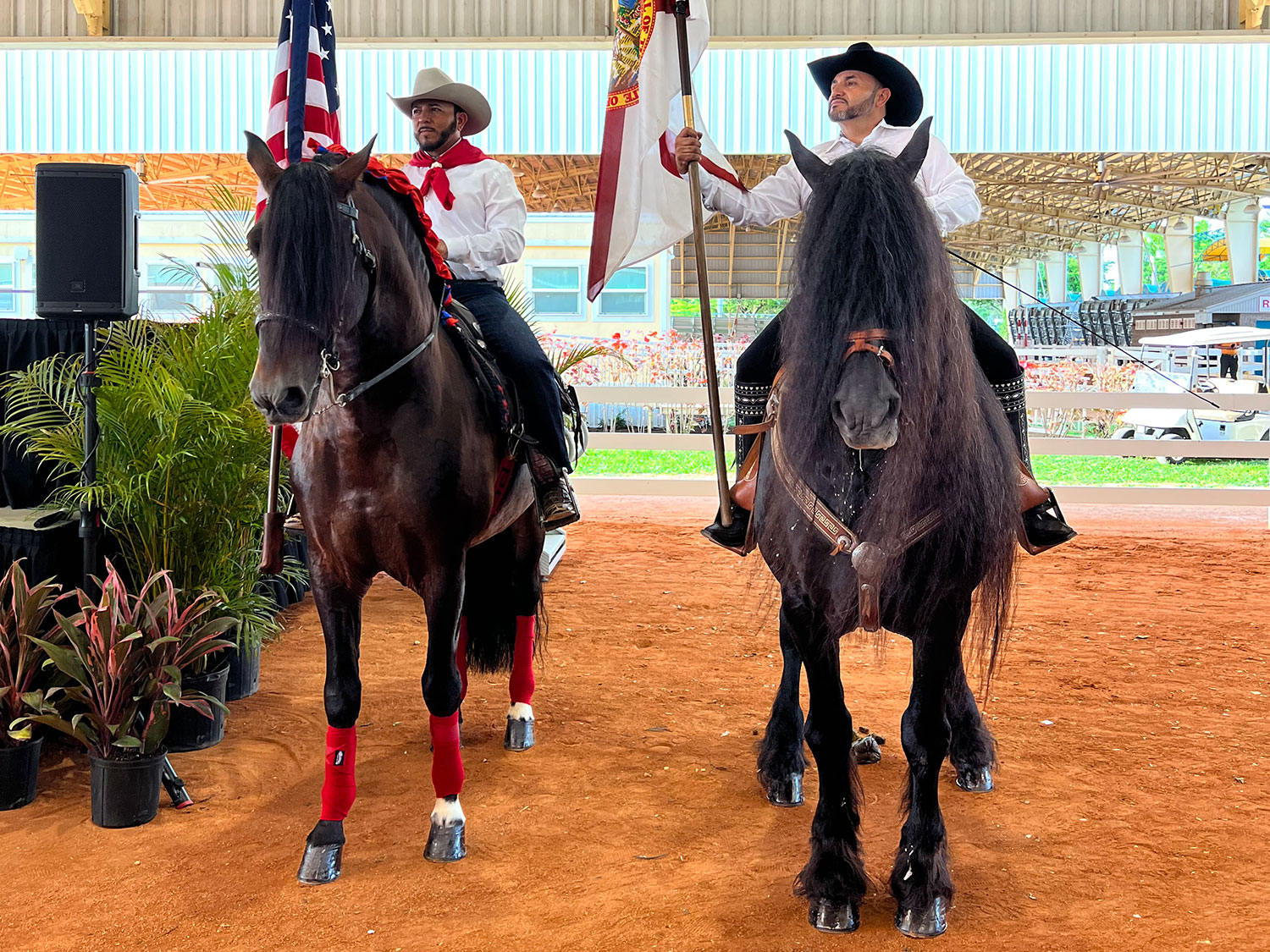 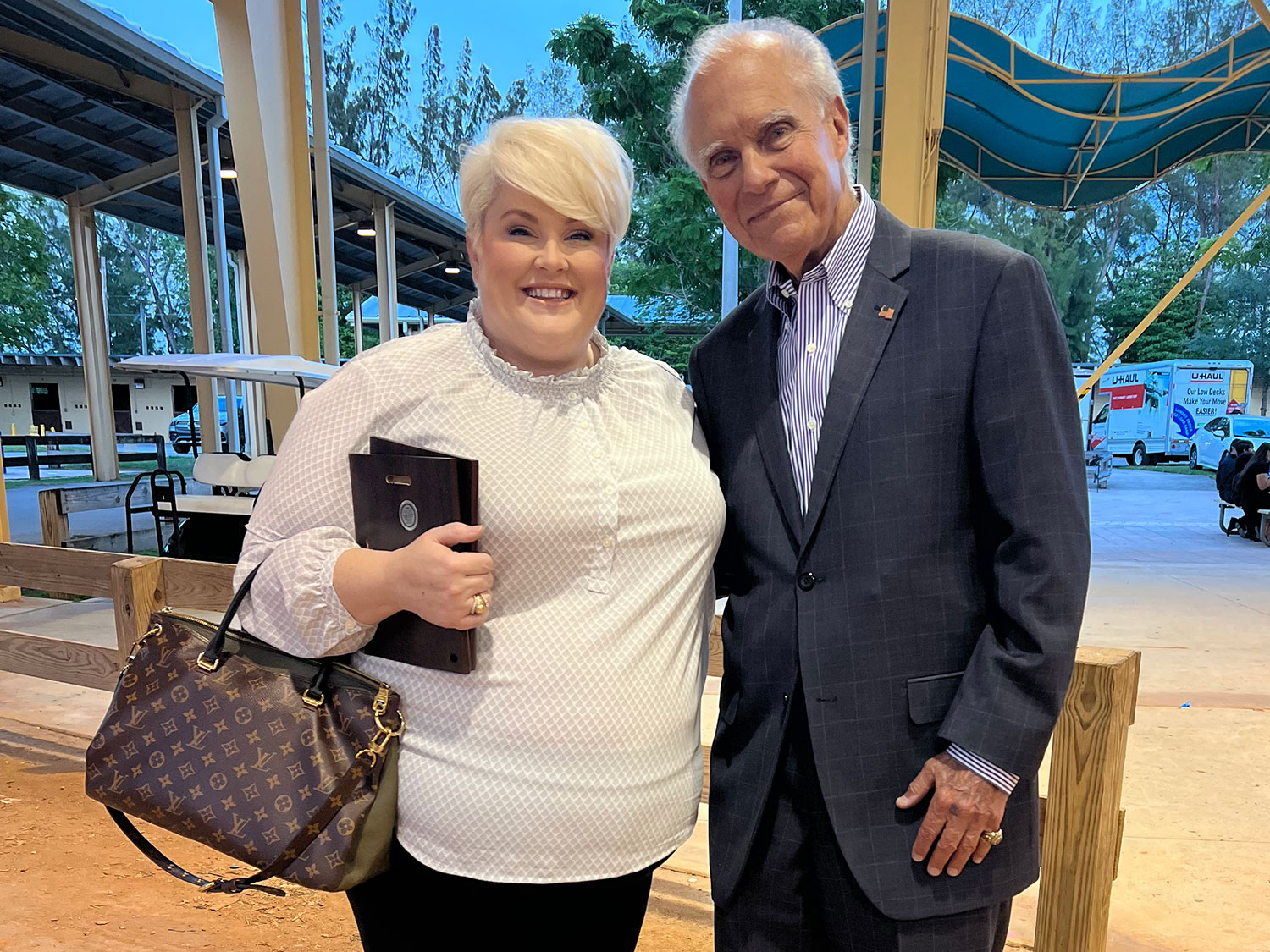 Saturday was the Junior Show, which meant it was primarily a day of relaxation for both us and the cattle. Jeff and Mikey focused on taking care of the cattle and filling them up after their long trip, while Shari took a trip to the ocean and had a wonderful time. Luke and I enjoyed a leisurely al fresco brunch with good friends in the mild, zero-humidity weather; it was a beautiful day in Miami. 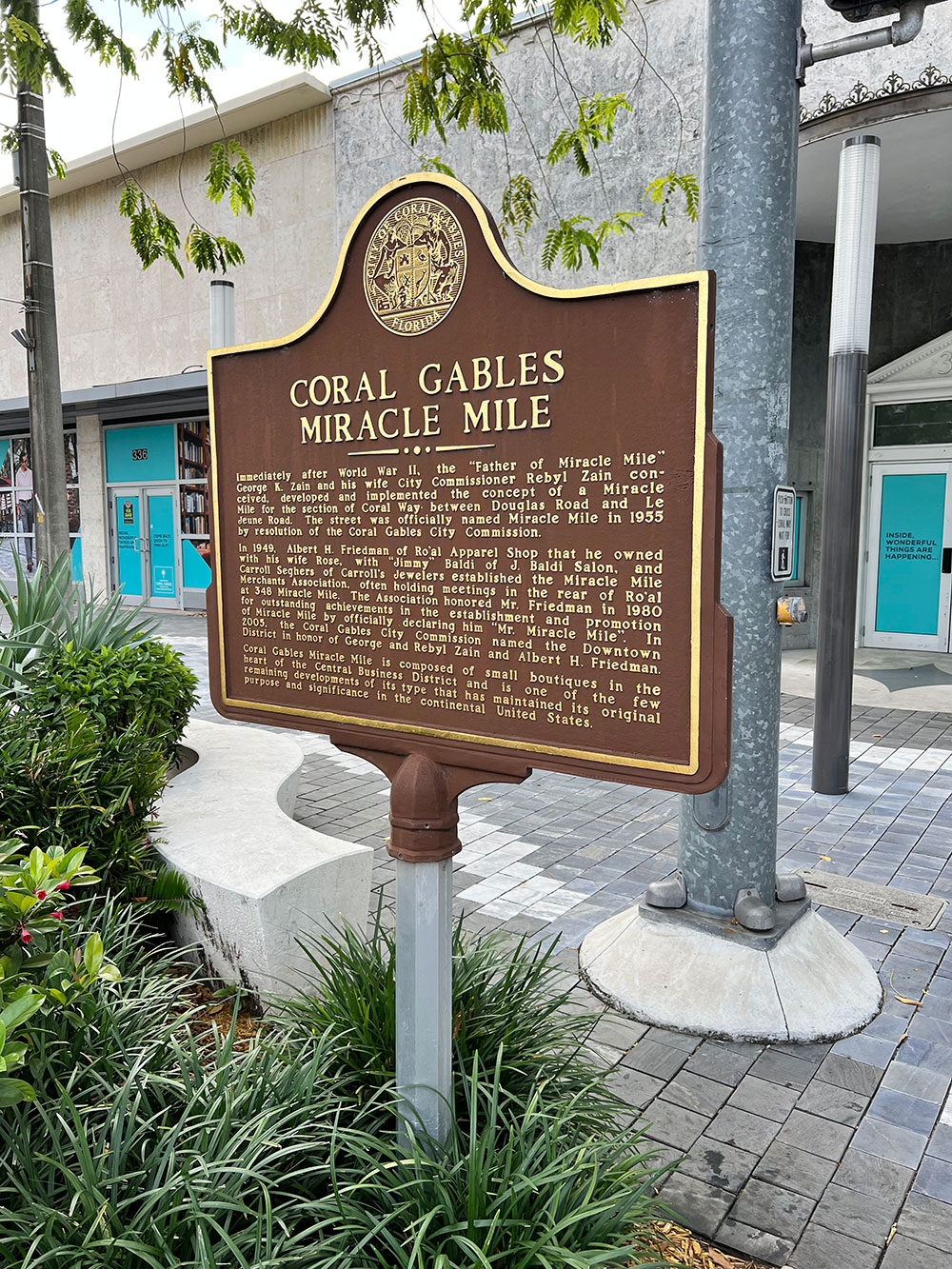 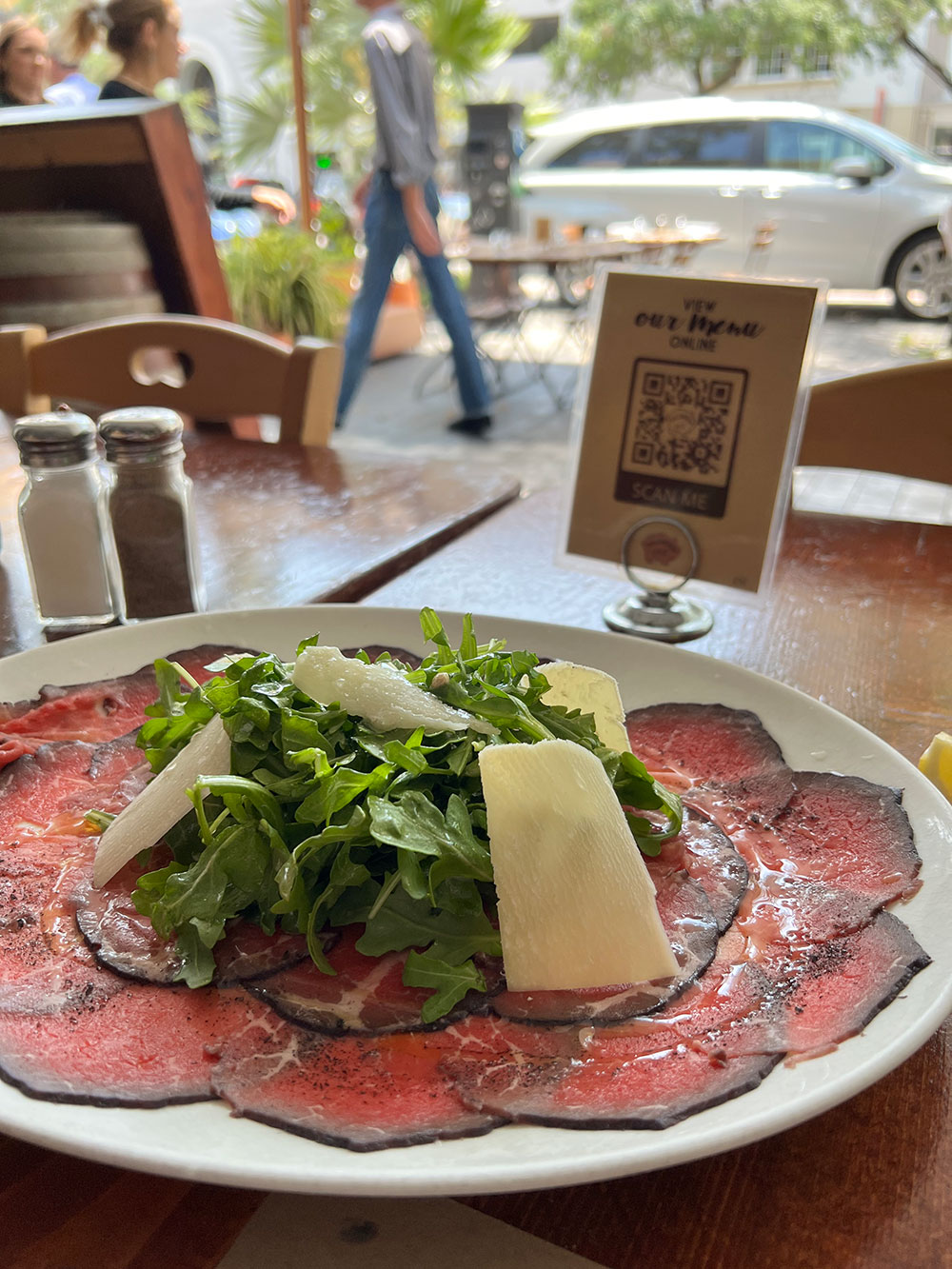 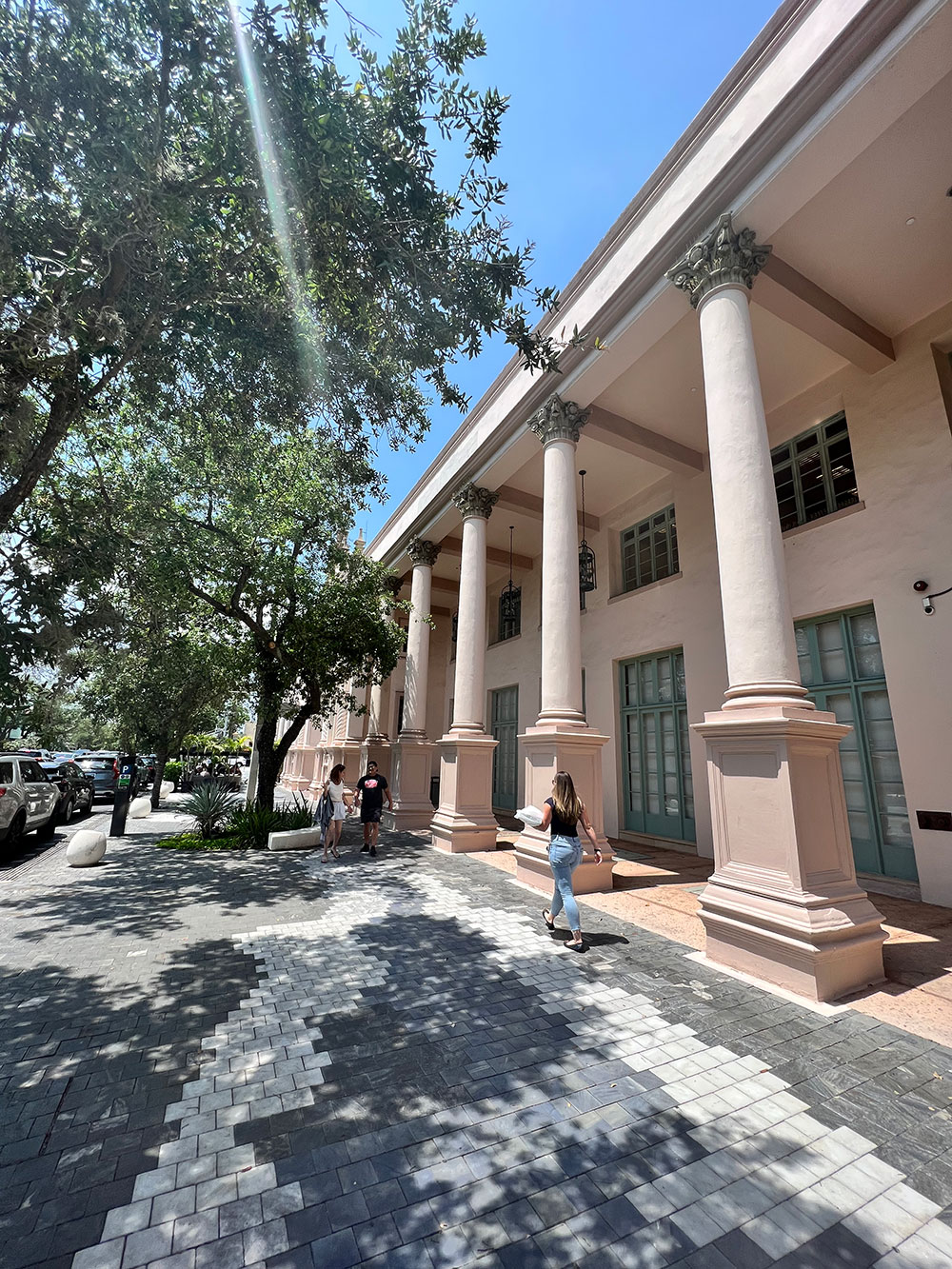 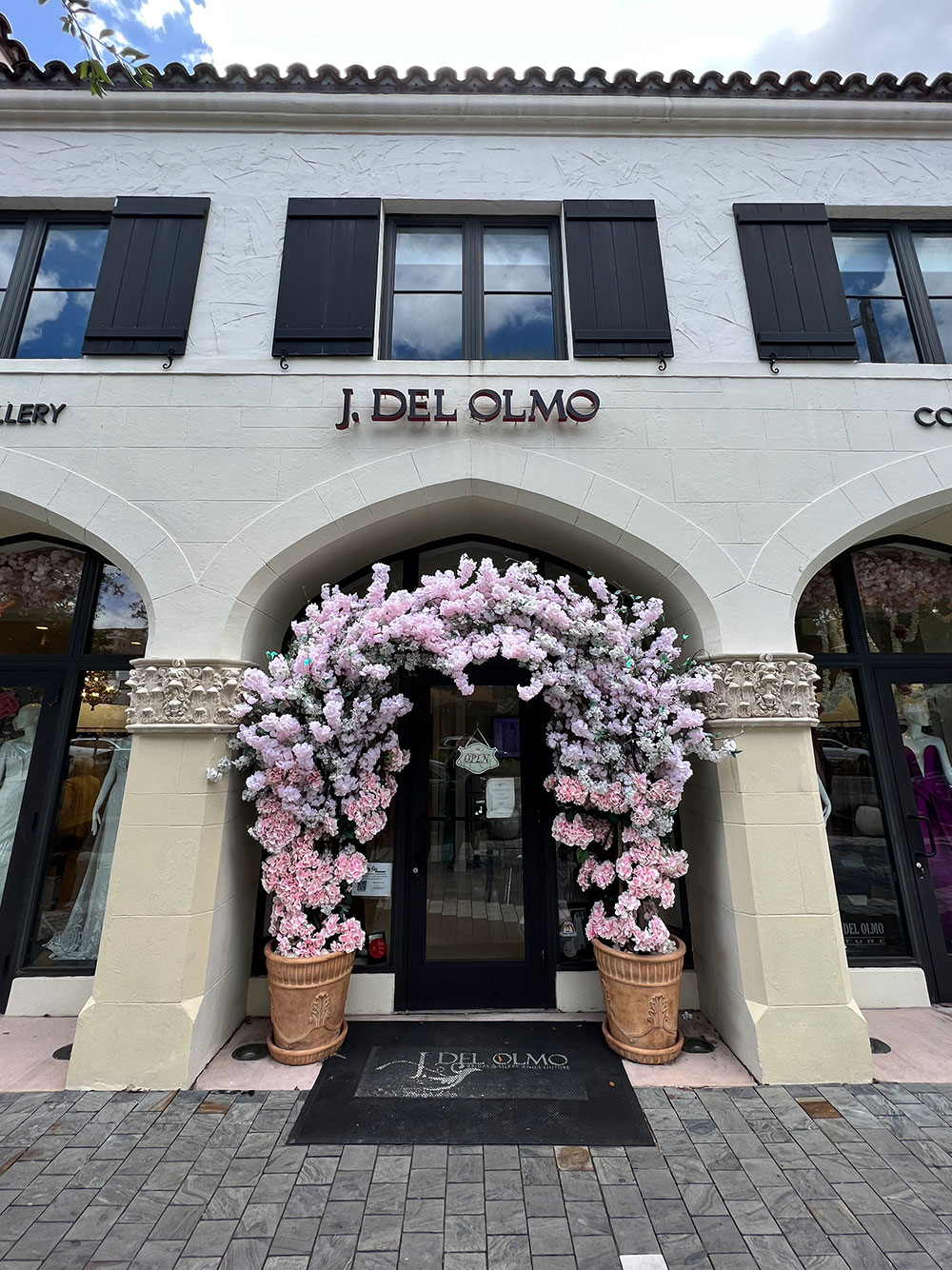 We got up bright and early for the open show. The Miami fairgrounds are very exhibitor friendly. It’s an open-air barn with lots of space, and the large, well-lit show ring is near the stalls; there’s also plenty of space for classes. Bleachers line one side of the arena, but we pulled our lawn chairs up and sat ringside for the show.

Showtime at the 2022 Miami International Agriculture, Horse, and Cattle Show:

We showed a Get of Sire on +Mr. V8 146/8 “Sloan,” and an ET Produce of Dam out of +Miss V8 879/6, both of which were single entries and therefore, first place. I want to thank Tucker Hargraves, Brandy Barnes, and Lily Larson who helped Mikey, Jeff, and Luke with the group classes; they made a terrific team of showmen!

In the female show, we showed three heifers from our own string. Miss V8 448/9 was first place in her class and then, Calf Champion. She is sired by +Mr. V8 146/8 “Sloan.” It was fun to hear Jeff reminisce about showing her mother, +Miss V8 43/7, when she was in the V8 show string many years ago. We also took Miss V8 407/9, who placed second out of four heifers.

Miss V8 279/9 has been trading off Grand Championships over the last show season with her half-sister, Miss V8 277/9. Both are sired by Sloan. Because of the long trip to Miami, we only took one of them to the show. I’m sure while 279/9 was loading into the trailer early Wednesday morning, 277/9 was wondering where the heck she was going without her! Even though 279/9 is in our showstring, Brandy Barnes usually shows her for us. Brandy is a longtime family friend and has hauled 279/9 to several shows for us when we didn’t take a string ourselves. My “Uncle Max” was Brandy’s grandpa. So somehow, that makes us related, right? It certainly does in the Brahman world! Brandy is an excellent showman. Brandy showed Miss V8 279/9 to first in a class of five, Junior Champion, and Grand Champion.

The McCall family of Little Pecan Cattle had their heifer Miss V8 326/9 at the show as well. She was a single entry in her class, but in division was Reserve Intermediate Champion.

We took one bull to the show, Mr. V8 891/8 “Pathfinder.” He has been doing consistently well in the 2022 season shows, winning his class all but twice (at the Kickoff Classic and one Belton show). This year, “Pathfinder” was named Division Champion twice (Brenham, Shreveport) and Reserve Division Champion three times (Beaumont, Oklahoma City, and Houston.) In Miami, he added his first Grand Championship to his show record. He was first place in a class of four, Junior Champion, and Grand Champion. He is one of the oldest sons of Sloan, and we own him with GKB Cattle. 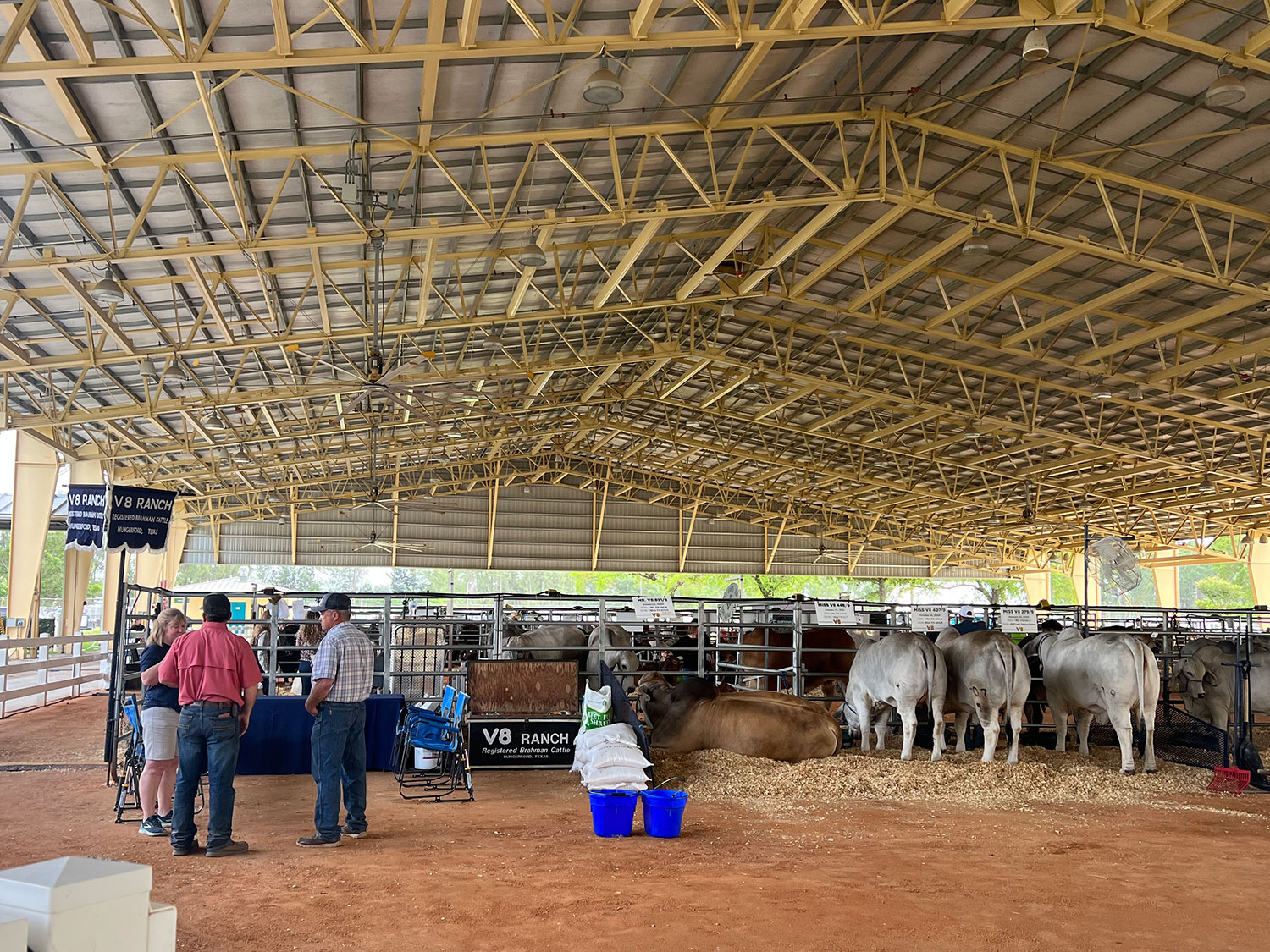 Overall, my review of the show is an enthusiastic two thumbs up. This show was very exhibitor-friendly, and the people of Miami were very welcoming to the Brahman exhibitors.  I didn’t watch every class, but in the classes I did watch, every animal received a thorough explanation of reasons; that was refreshing!

I overheard that there were 94 head at the show. The atmosphere felt laid back and relaxed, and it was a pleasure to watch a show of this size. Many of the classes were single entries and only came in for their divisions. The judge made sure to evaluate those single entries and describe them on the microphone. That’s important to me as an exhibitor, as I find it disappointing when (at some shows) single entries don’t receive a critique of their animal.

Miami, we’ll be back! We stayed at a wonderful hotel recommended to us by Kelvin Moreno, who is in charge of the Miami show. The hotel was in an area called the “Miracle Mile” with plenty of fantastic restaurants (the food was amazing!) and shops, all within walking distance. The airport is nice, and you’ll find an abundance of Uber drivers to take you anywhere you want to go. Only thing is, the Uber drivers mostly speak Spanish, so have Google Translate open on your phone, or be ready to phone a good friend who can speak Spanish for you; I used both methods of communication on this trip! If you’re considering going to the Miami show, I can’t encourage you enough. V8 Ranch definitely plans to make the Miami International Agriculture, Horse, and Cattle Show a yearly thing!

Thank you to Kelvin Moreno and Senator Souto for being such wonderful hosts to the Brahman breeders who traveled to Miami. Our show cattle in Miami were under the care of Jeff and Shari Richard, longtime V8 collaborators. Mikey Curry showed the V8 cattle and did a fantastic job. Our next show will be the Jambalaya Classic in Lake Charles, Louisiana on May 6-8, 2022. 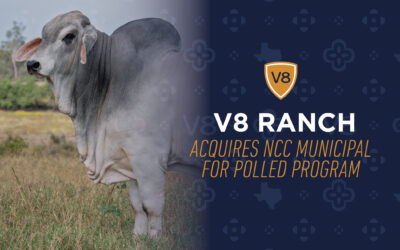 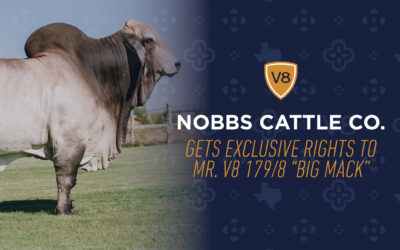 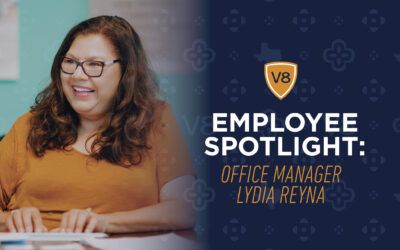